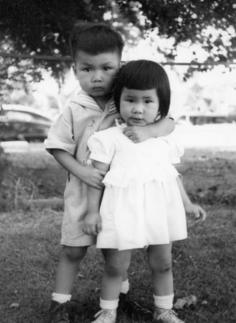 Born in the U.S. to immigrant parents from China, Amy Tan grew up in the San Francisco Bay Area in a succession of twelve homes by the time she graduated from high school. At age 15, she lost her older brother and father to brain tumors. After this tragedy, her mother, fearing a curse, impulsively took Amy and her younger brother to Europe to see the world. After several missteps, the three wanderers settled in Montreux, Switzerland, where Amy fell in love, nearly eloped, played an unwitting role in the drug bust of friends, and still managed to graduate from high school one year early.

Amy attended five colleges: Linfield College, San Jose City College, San Jose State University, University of California at Santa Cruz, and University of California at Berkeley.  She received her B.A. with a double major in English and Linguistics, followed by her M.A. in Linguistics.  She worked as a language development specialist for county-wide programs serving developmentally disabled children, birth to five, and later became  director for a demonstration project funded by the U.S. Department of Education to mainstream multicultural children with developmental disabilities into early childhood programs.  In 1983, she became a freelance business writer, working with telecommunications companies, including IBM and AT&T.

In 1985, Amy began writing fiction as an incentive to cut back on her heavy freelance workload.  She attended her first workshop at the Squaw Valley Community of Writers and then joined a writers group led by writer and creative writing teacher Molly Giles.   Her first story was published in 1986  in a small literary magazine, FM Five, which was then reprinted in Seventeen  and Grazia.   Literary AgentSandy Dijkstra read her early work and offered to serve as her agent, even though Amy asserted she had no plans to pursue a fiction writing career.  In 1987, Amy went to China for the first time, accompanied by her mother.  When she returned home, she learned that she had received  three offers for a book of short stories, of which only three had been written.  The resulting book, The Joy Luck Club, was hailed as a novel and became a surprise bestseller, spending over forty weeks on the New York Times Bestseller List.

Her other novels are The Kitchen God's Wife, The Hundred Secret Senses, The Bonesetter's Daughter, Saving Fish from Drowning, and The Valley of Amazement (2013), all New York Times bestsellers. She is also the author of a memoir, The Opposite of Fate, two children’s books, The Moon Lady and Sagwa, The Chinese Siamese Cat and numerous articles for magazines, including The New Yorker, Harper’s Bazaar, and National Geographic.  She is also the author of the short story “Rules for Virgins” published in e-book format (Byliner Original).  Her work has been translated into 35 languages, from Spanish, French, and Finnish to Chinese, Arabic, and Hebrew.  Amy Tan latest book, Where the Past Begins: A Writer’s Memoir, will be published by ECCO/HarperCollins in October 2017.  She is at work on another novel, The Memory of Desire.

Amy  served as Co-producer and Co-screenwriter with Ron Bass for the film adaptation of "The Joy Luck Club," for which they received WGA and BAFTA nominations.   She was the Creative Consultant for "Sagwa," the Emmy nominated PBS television series for children, which has aired worldwide, including in the UK, Latin America, Hong Kong, China, Taiwan, and Singapore.  Her story in The New Yorker, “Immortal Heart,” was performed on stages throughout the U.S. and in France. Her essays and stories are found in hundreds of anthologies and textbooks, and they are assigned as required reading in many high schools and universities.  She was the guest editor for Best American Short Stories 1999.  She appeared as herself in the animated series The Simpsons. She performed as narrator with the San Francisco Symphony playing an original score for Sagwa, by composer Nathan Wang.  Amy Tan has been nominated for the National Book Award, the National Book Critics Circle Award, and the International Orange Prize, and has won many awards including the Commonwealth Gold Award.

Amy has lectured internationally at universities, including Stanford, Oxford, Jagellonium, Beijing, and Georgetown both in Washington, DC and Doha, Qatar. She has delivered a TED talk and spoken at the White House, appeared on the popular NPR program Wait Wait…Don’t Tell Me, as well as on Sesame Street on Public Television.  The National Endowment for the Arts chose The Joy Luck Club for its 2007 Big Read program.

Amy  also wrote the libretto for The Bonesetter’s Daughter, which had its world premiere with the San Francisco Opera in September 2008. The book Fate! Luck! Chance! Amy Tan, Stewart Wallace, and the Making of The Bonesetter’s Daughter, by Ken Smith, was published by Chronicle Books in August 2008, and a documentary about the opera, Journey of the Bonesetter's Daughter, premiered on PBS in 2011. Amy Tan has served as lead rhythm “dominatrix,” backup singer, and second tambourine with the literary garage band, the Rock Bottom Remainders, whose members included Stephen King, Dave Barry, and Scott Turow. Their yearly gigs raised over a million dollars for literacy programs. To honor her support of zoological field research, her name was given to a newly discovered species of terrestrial leeches,  Chtonobdela tanae, the first soft-bodied microscopic organism to be identified using a new method of computed tomography. In keeping with her love of science in the wild and childhood love of doodling, she recently took up nature journal sketching.

Amy lives with her husband and their two dogs in California and New York.